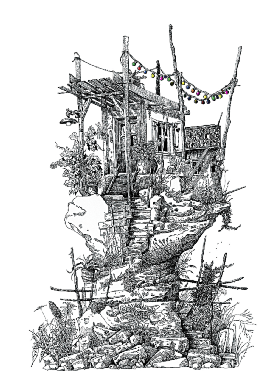 François Schmidt was born in 1957 in France, where he lives. Originally adraftsman, he got back to drawingafter a period of engraving. For thepast 20 years, he’s been spending his summers drawing in Pyrgos, Tinos. His works include posters, book illustrations, as well as drawings for exhibits.He also works for the French television and the Champagne wine industry. Schmidt mainly draws in black and white, sometimes adding touches of colour. He creates a cheerful worldwith playful details reminiscent of child-hood fairytales, strange objects and fantastic creatures.